Bored in the Corona quarantine? Asmodee provides you with trial versions of popular card and board games that you can download, print out and play for free.

Have a look at Netflix, read through books, play the internet? Before you make the driftieth round on Instagram and Twitter, Asmodee would have an alternative – provided you have a partner, family or flatmate and a printer ready. The parlor game forge provides you with popular and, in some cases, award-winning card games as print & play – most of them as test versions. That means you can download PDFs of the cards and rules, print them out, cut them out and start playing with them.

The size of the print & play games does not always correspond to that of the full versions. But that’s enough to try a few rounds and learn the game. In addition, more and more of them should appear in the next few weeks – so there’s plenty of variety.

If you already have a few Asmodee games at home, the game makers will give you a few tips on how to play them with your friends using video conferencing tools like Zoom or Google Hangouts . Including the absurdly funny Exploding Kittens, for which there is now a “Quarantined Kittens” game variant .

In Dixit it comes to creativity, imagination and killed guessing stories. Up to four players receive a handful of cards with artistic pictures. One of you – the narrator – comes up with a story, a quote, a word or just a sound for one of your cards and lets the others know. Then they all place a face-down card on the table that they think also fits the given word or sound. The cards are shuffled and laid out. The goal is then to find the narrator’s card. If everyone guessed the right card, it was too easy – no points. If nobody guesses the right card, it was too difficult – no points. It’s all about balance.

36 cards are included in the trial version . The full version  offers one more corner and can be played with up to six people. There are also numerous extensions with different topics and settings. 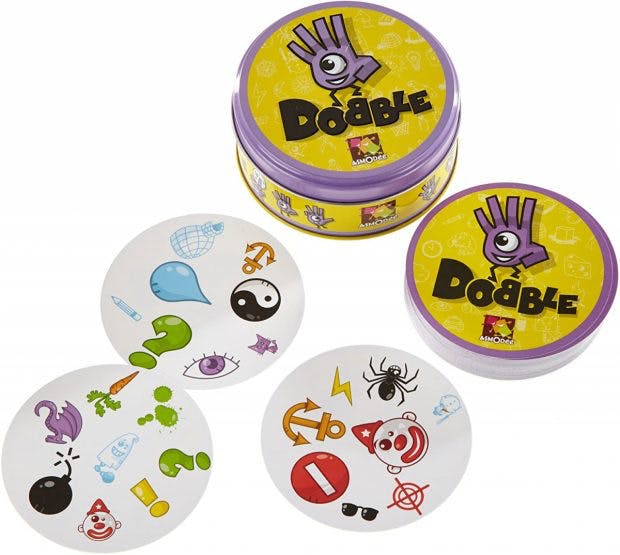 At Dobble you have to be alert and nimble to be the first to recognize as many symbol cards as possible and to win for you.

For Dobble you need keen eyes and quick reactions. There are various colorful symbols and pictures on the round playing cards – each player gets one at the beginning. Then the top of the pile is turned over and you have to quickly find a symbol that coincides with one on your card. Whoever is the first to announce which symbol looks like one on your card, you can take the card and the next one is revealed. Whoever has the most cards when the pile is empty wins.

The demo version contains 16 cards. The full versions  , which are also available with small educational games for kids, have a good three times as many and also offer varied game variants.

Strategy, tactics and fun coloring are required for up to four players in Combo Color . On the game boards, which are divided into fields, you have to paint as many specific fields as possible with your color. You need colored pencils or felt pens for this. In each turn you can only paint one square with an arrow, or one that is adjacent to another, already colored one. Some are worth more points than others. Step by step you work your way until all fields are colored – then the points are counted. 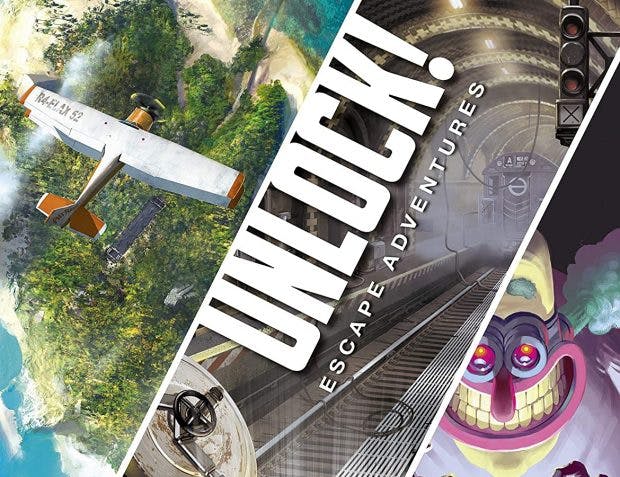 Unlock! comes as a card game. But behind it there are exciting escape room adventures with riddles and puzzles.

Escape rooms are popular, but currently hardly feasible. You can escape within your own four walls with this card game – but please stay inside, Social Distancing! Unlock  packs small escape adventures in card form along with puzzles and combination puzzles for up to six players. The trial version includes a tutorial and several demo adventures that consist of over 100 maps in total. For this you need a free app, which is available for iOS and Android and which guides you through the sessions, has timers and music ready and in which you can find additional game elements.

There are also various full versions of Unlock  , in which you either receive individual additional adventures or three of them are included in packages. Here, too, you always need the associated mobile app.

At Corinth you slip into the roles of Greek merchants and assert yourself against each other in trading on the port market. With a complex dice system, each round decides which goods are available. You yourself then decide whether you look to meet your demand yourself – or to ruin someone else’s business by buying up the goods they need. At the same time, of course, you have to manage the coal. After around 15 rounds it is evaluated who is the most successful dealer in Corinth.

In contrast to the other games presented here, you can basically download the full version of the game . In addition, you only need a couple of pens and six-sided dice in two different colors. 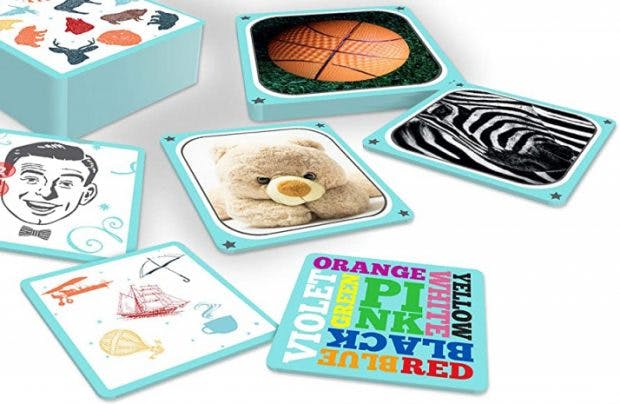 You can work your gray cells, for example, with Cortex Challenge.

Cortex Challenge demands your memory, comprehension and ability to react . You win cards by solving the brainpower problems on them as quickly as possible. You follow the path out of small mazes as quickly as possible, note the number of certain objects on a map, find a word that has the same color as it says – and so on.

The trial version only contains a handful of cards that should be played through quickly. The full version  comes with 90 task cards, some of them vivid and with tactile tasks, which of course cannot be done with Print & Play.

Timeline puts the historical knowledge of up to six players to the test – and trains it at the same time. Here you lay out a card with a historical event – big things like the moon landing or the sinking of the Titanic, but also “little things” like the invention of the toothbrush or the production of the first croissant. In turn you then have to arrange the events on your own hand cards around the ones on display in a row. One card per train, in chronological order. You are only allowed to look at the back with the year numbers when your card is in place. If you are right, it stays, if you are wrong, pull a new one and discard the wrong one. The first player to run out of cards wins.

The demo version contains 30 cards for printing. The different full versions  each bring over 50 cards and also specifically deal with inventions or large events. They can all be combined with one another.

With Concept you have to describe terms to your fellow players, but you can only use pictograms. You can practice guessing in the stripped-down trial version.

There’s a picture puzzle at Concept . The aim here is to recognize specific terms based on sometimes complex combinations of different pictograms. In the demo version you can test your skills with the help of 30 cards – the point here is simply to be the first to guess the term using the combinations of images. As an alternative, which is more aimed at children, there is also a demo by Concept Kids Animals .

The full version  of Concept is a real board game. Here you mark the pictograms on the game board with your playing figures and colored dice that describe the term you have on a secret card. The other players then have to guess it and collect points. Talking is of course prohibited.

As the name suggests, Story Cubes is a dice game all about stories. You throw dice with small pictograms on them and come up with a story for the combination you rolled. In other game variants you have to paint a picture of the dice results, or you put together pictograms similar to Concept to represent a term that other players then have to expect.

Of course, the print & play version does not contain any dice. For this you will get a few ready-made combinations of dice as pictures with which you can start playing. Nice: There is also a cube template on which you can draw your own symbols. The full version  is available in different versions that can all be combined with each other. 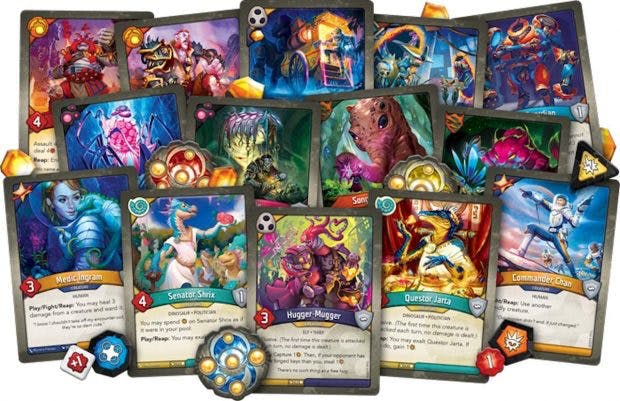 At Keyforge – developed by “Magic: The Gathering” maker Richard Garfield – you always play against each other with unique card combinations.

The colorful one-on-one card game Keyforge also comes from the inventor of Magic: The Gathering . Players collect resources to be the first to forge three keys and battle against fantasy creatures in card form. One of the highlights of the Unique Deck Game is that each player deck is compiled from a unique combination of cards using an algorithm. Four of these decks are now available to download for free to print out – together with the rules of the game and the necessary game materials. So far, however, only in English.

This only rudiments the complexity and nuances of Keyforge in order to get to know the game, but it is completely sufficient. Additional decks and sets for two players  bring more variation into the game.

In the One Key picture puzzle , a player selects one of the many picture motifs that the other players have to guess. To do this, you can only use pieces to show the others whether a certain motif is strong, medium or weak similarity to the one you are looking for. In this way, more and more motifs are gradually being eliminated until, ideally, only what you are looking for is left. If the correct one is removed prematurely, the game is lost.

The print & play version contains 56 motifs as well as short rules in English and other game materials for printing. The German rule book is also available as a download. The full version  has a total of 84 motifs for guesswork on board

Bluetooth speakers put to the test: 11 portable speakers for indoors and outdoors

Join the Streaming Game: Huge selection and one month free with Joyn PLUS +

Bluetooth speakers put to the test: 11 portable speakers for indoors and outdoors

Join the Streaming Game: Huge selection and one month free with Joyn PLUS +