The audio specialist Sennheiser enters the automotive sector. Its Ambeo 3D audio system is currently shown in the 2020 Karma Revero GT from the US luxury car manufacturer Karma Automotive.

Sennheiser is known as a quality manufacturer especially for headphones and microphones. Now the German sound specialist wants to conquer in-car entertainment and communication in the automotive sector with its Ambeo 3D sound system. To this end, Sennheiser is working with the Californian luxury automobile manufacturer Karma Automotive. In its 2020 Karma Revero GT, which was introduced in spring and is based on the legendary Fisker Karma , Sennheiser presents the audio system to the public.

According to Sennheiser, the  Ambeo audio system has several loudspeakers on two main levels. There is also a subwoofer. The headrests of the 2020 Karma Revero GT are also integrated into the speaker concept. According to the manufacturer, a specific 3D audio source is not necessary for spatial sound. Instead, the integrated upmix algorithm converts stereo material into 3D audio, according to Sennheiser. The user controls audio sources and volume via a graphic surface. This allows you to set the degree of immersion and your own position within the sound space. 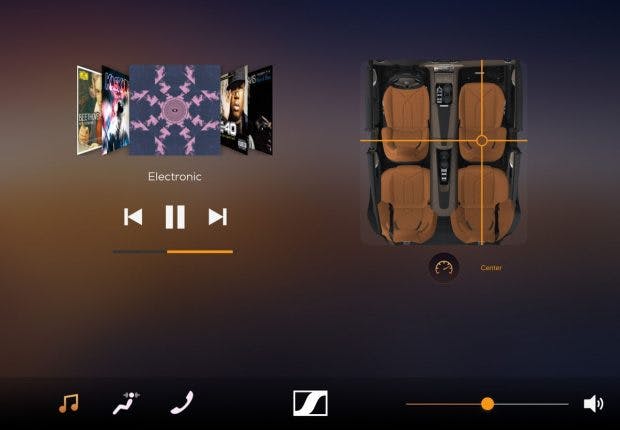 The Ambeo 3D audio system from Sennheiser in the 2020 Karma Revero GT.

With the Ambeo audio system, Sennheiser promises “crystal-clear audio transmission for phone calls in the car”. This is ensured by the beamforming technology, thanks to which the built-in microphone arrays focus the speaker. Wind, engine or rolling noise, on the other hand, should be dampened. Passengers should in turn be able to decide whether they want to take part in the phone call or prefer to listen to music or watch films without being disturbed.

Difficult acoustic conditions in the vehicle

“Our goal was to create the best audio system in the industry. The system we have developed impresses with authentic surround sound, high speech intelligibility and a multitude of personalization options, ”said Co-CEO Andreas Sennheiser. According to its own statements, Sennheiser has been working on the development and fine-tuning of the technology for the automotive sector for over two years. The company said that you had to start from scratch. The acoustic conditions in the vehicle are complex and difficult.

Sennheiser has not yet said when and at what price the Ambeo 3D audio system will be launched. It is also unclear in which other vehicles besides the 2020 Karma Revero GT the technology will be installed. In Karma, Sennheiser praised the development focus on electric mobility. “With Karma we are combining the future of mobility with the future of audio technology,” says Daniel Sennheiser, Co-CEO of Sennheiser.